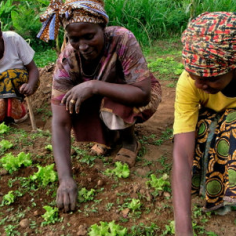 Something is off in westerner’s popularized representations of the third world. For the last 300 years, Britain has updated the way in which it says: we the rich, have a responsibility to help the poor. From slave trade memorabilia, to psychological guilt and finally, hope in the value of other cultures as long as they prosper (of course) through criteria attached to western values, Britain has cultivated a selective projection of poverty. In our democratic society, it has always been the implicit rule that for your ideas and voice to reach a large audience, you must possess one of three factors at any given time: a privileged class, status or wealth. 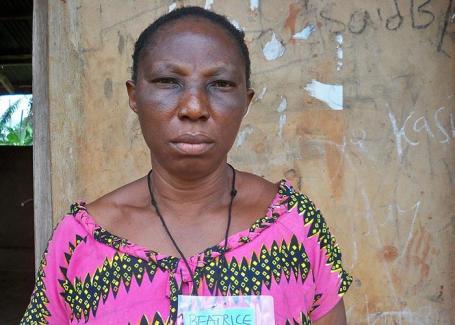 Women for Women international is a Non-Profit Organisation that offers support to female survivors of war in many different ways. Beatrice, is one candidate whose life was changed after participating in their “programme”, which enabled her to reclaim stolen farm land. Her “story” on the website gives very selective details such as: she is a widow with a family. Her facial expression remains natural, highlighting a raw unedited beauty that frees her from the political and economic reasons which have contributed to her fate. Right now, she is deserving of access to help – an ‘ideal victim’. A kind of truth that highlights her vulnerable, innocence and sorrow is reinforced through the name badge personalisation, a neutral expression, and highly defined headshot. These features keep the reader focused on the women’s story and not her as an individual. Whilst this could be said to just highlight information that is relevant to the charity’s aims, from a psychological perspective, it is utilising a stereotype that we are all too familiar with. The image reflects a common social reality of the Black African women. She is living in poverty, with an upsetting story, no male support, too many children and no money. Beatrice becomes frozen in time with all the other Black African women before her in the exact same predicament.

Post-colonial historian Spivak, believes that these tailored truths become how marginalised people are remembered in history. Statistics instead of individuals. This becomes a problem when receivers of aid do not get an opportunity to paint their world for us because we then place more value in the media given to us, than actual people.

In the following comic relief video clip, Made In Chelsea star, Jamie Laing uses sympathetic language that separates us (a British audience) from them (the majority world) to reiterate the giving nature of the West. Only then does Rebecca tell her story. It goes a step further than Women for Women International by actually illustrating her life, which to a certain extent, combats the distance of material wealth that is inflicted by images. However, a western stamp of approval is required for her story to be adequate. Just enough sympathy, a sprinkle of hope and faith in education to change her life.

The Advertising Standards Agency recently published a decrease in the number of complaints by members of the public against charities’ adverts. This definitely shows we’re heading in the right direction. In other words, there is less guilt tripping tactics and more information about those who need aid.  It is not so bad to tailor advertising to the cause you want to help, for an audience that you know will give. However, I think we should remember that these are just advertisements. In the same way that you are not defined by statistics associated with your identity, the same should also be acknowledged for people in the majority world. If you do not define yourself according to media representations, why enable the same prejudice to guide you for example, to believe that Africa is a country filled with poverty?

The reality largely portrayed by the humanitarian/development sector over the last 300 years seems to reiterate that large parts of the majority world are suffering and rely on global support. Whilst this is an important message, it is also a very simplistic and limited one. So, in order to avoid a narrow minded idea of social progress, don’t let images or videos speak for you, in the same way that they are speaking for the “third world”.